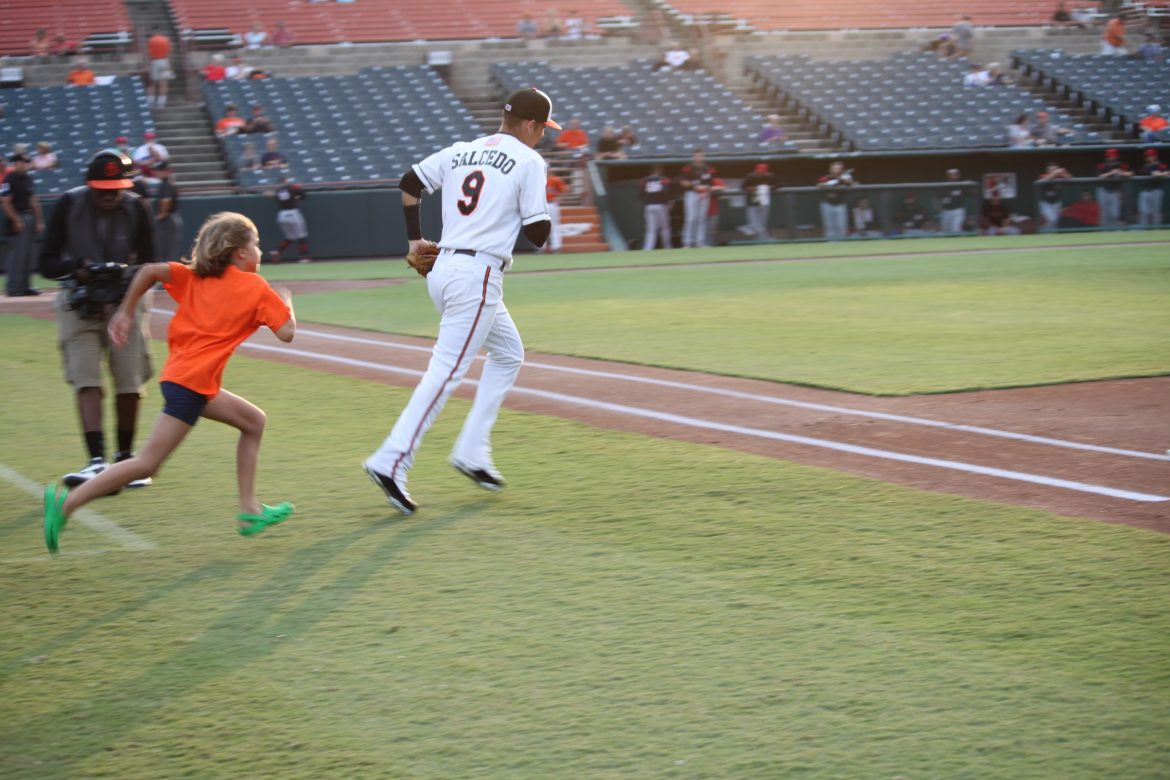 Maris Thornburg of University Park runs out with Bowie Baysox shortstop Erick Salcedo to join him and the other players on the field for the performing of “The Star-Spangled Banner” before the game begins.

Every year, as the children prepare to leave Chesapeake Life Center’s bereavement camps, an offer goes home with them to attend a Bowie Baysox game on a special night. On Aug. 16, the bases were loaded with some of those young campers as members from the community cheered them on during the fifth annual Chesapeake Kids Night with the Bowie Baysox at Prince George’s Stadium in Bowie.

Pregame action for the kids included hanging out in the dugout with the players, who happily signed the baseballs they received from the Baysox. Cooper Klein, 9, of Pasadena, was selected to throw out the first pitch. Then, several campers ran out with the players as the starting line-up took their places on the field before “The Star-Spangled Banner” was performed. Many of the kids also got to participate in the between-inning games for which minor-league baseball games are known. At the seventh inning stretch, Hospice of the Chesapeake certified therapeutic musician Alex Strachan stepped onto the dugout with his violin and treated the crowd to “God Bless America” and “Take Me Out to the Ballgame.”

Thanks to the generosity of M&T Bank and several other sponsors, this year’s event raised about $5,000 for Chesapeake Kids, a program of Hospice of the Chesapeake that supports children in Anne Arundel and Prince George’s counties living with and affected by advanced illness. It also offers counseling and support programs for children and families grieving a loss, including Camp Nabi and Phoenix Rising children’s bereavement camps. 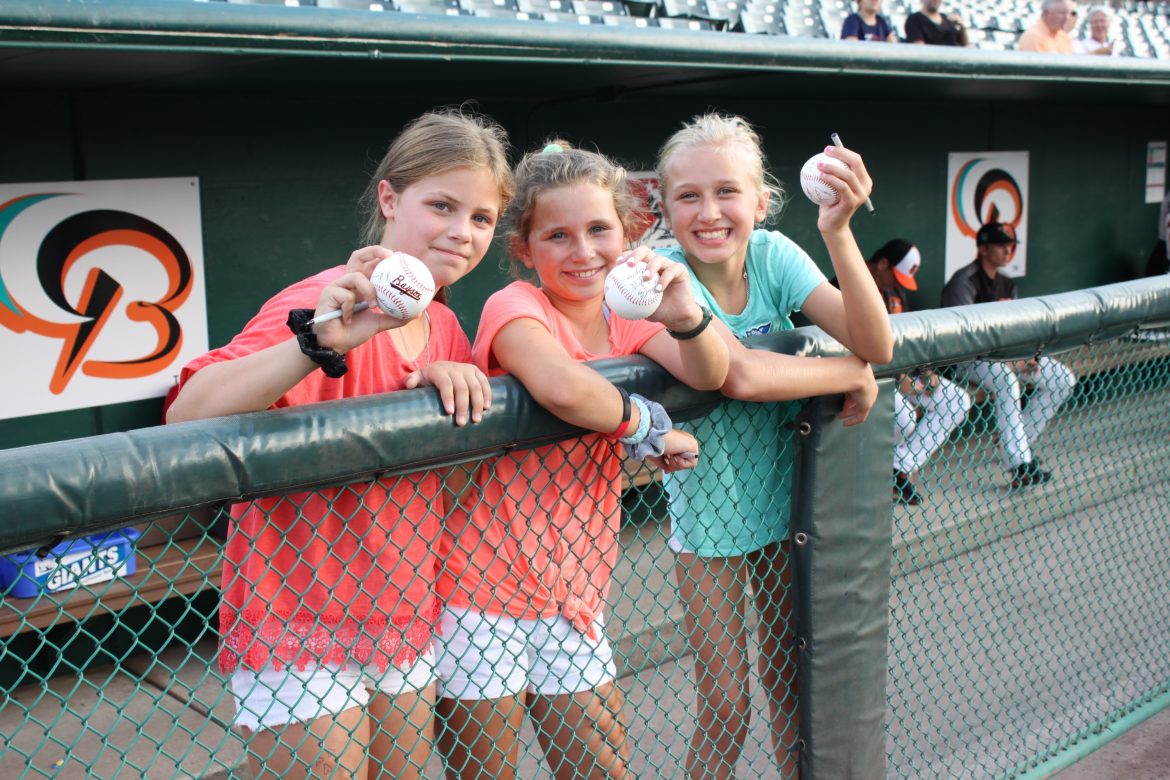 From left, Lindsay Boera, Suzy Urban and Olivia Ernst, all of Arnold, hold the baseballs given to them by the Baysox to have signed by the players before the game. Photo by Elyzabeth Marcussen, Hospice of the Chesapeake 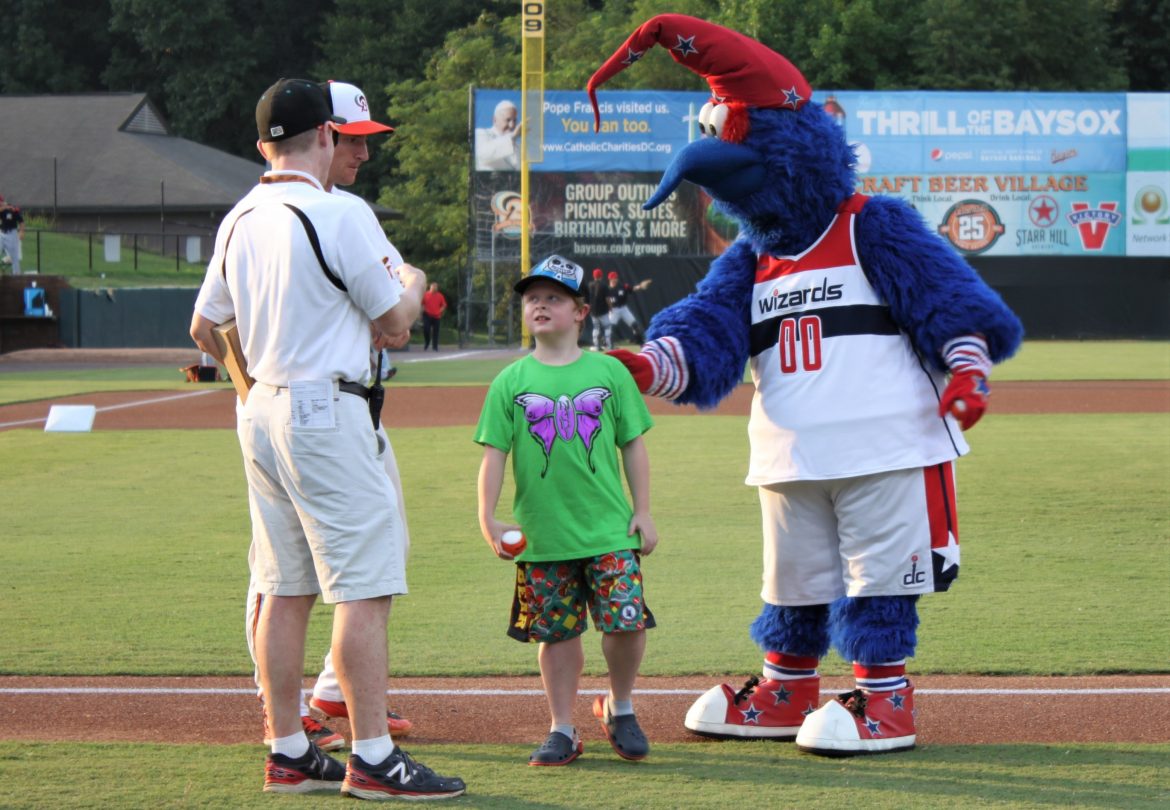 After throwing out the first pitch, Cooper Klein, 9, of Pasadena, is congratulated by guest mascot G. Wiz of the Washington Wizards basketball team. Photo by Elyzabeth Marcussen, Hospice of the Chesapeake 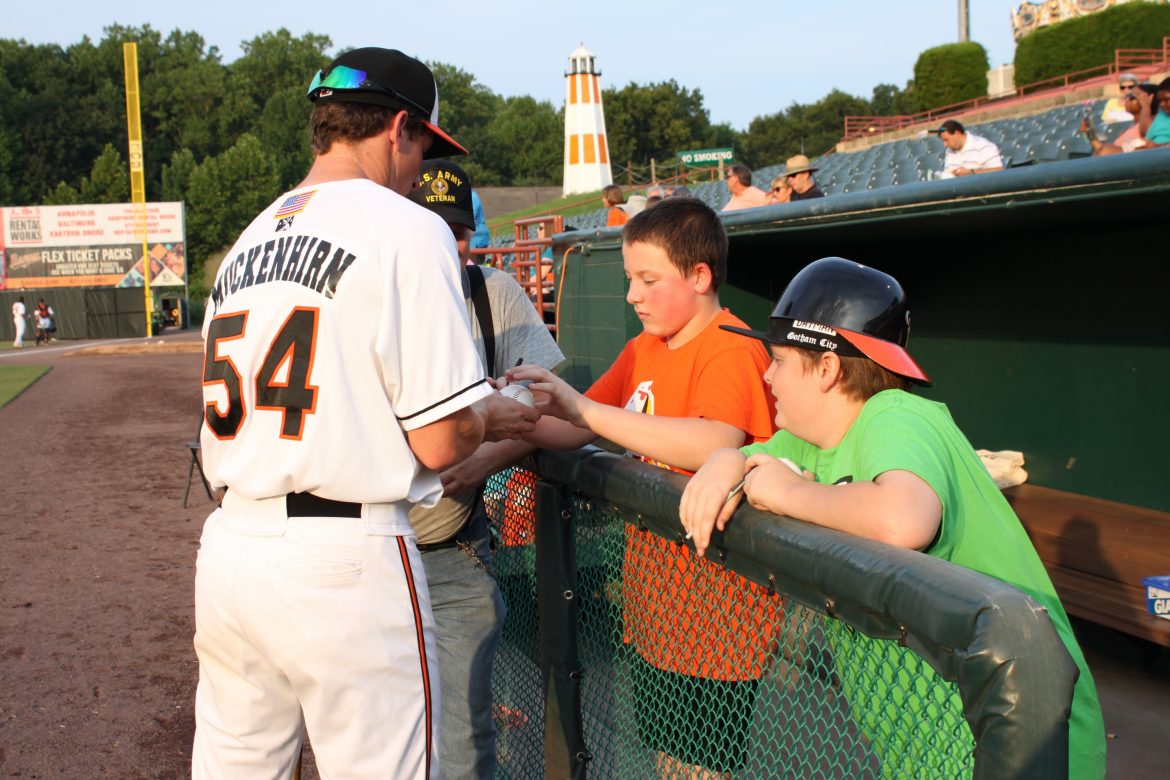 From left, Bowie Baysox pitcher Zach Muckenhirn signs baseballs for Frank Alderson III of Shady Side and Greyson Klein of Pasadena before the game begins . Photo by Elyzabeth Marcussen, Hospice of the Chesapeake