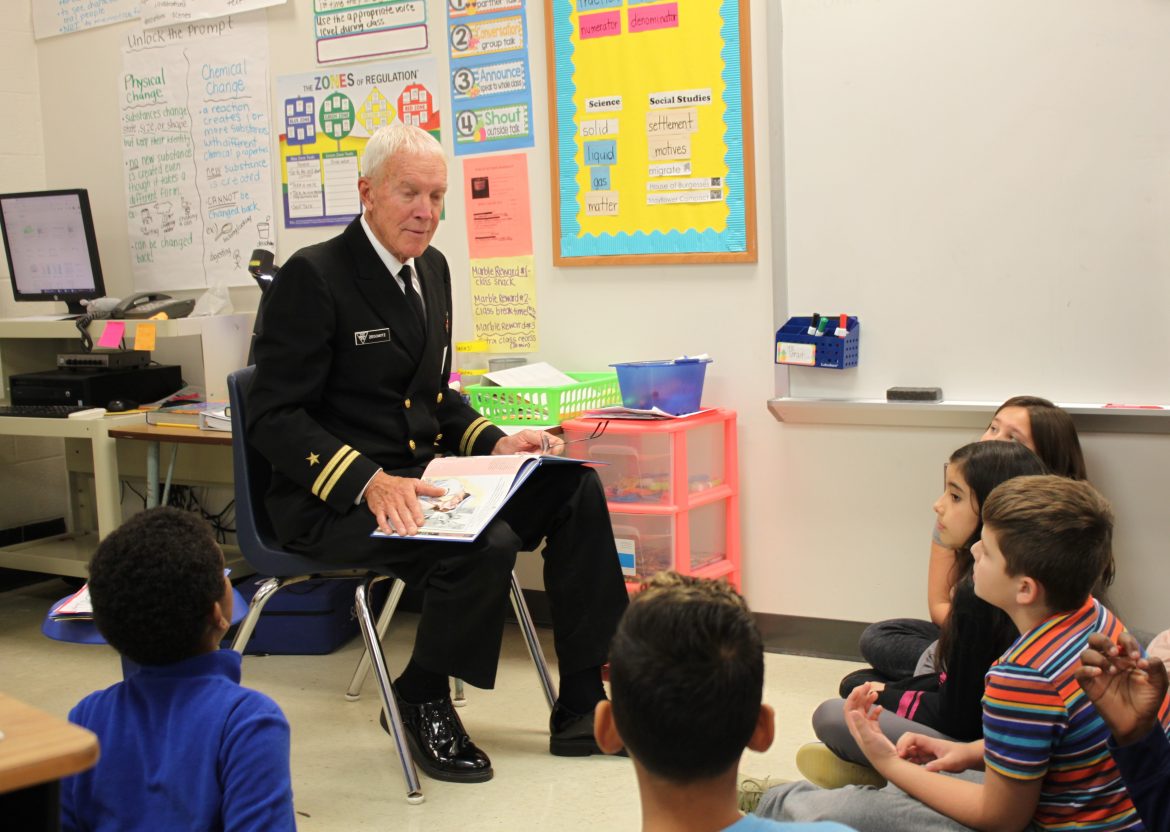 Navy and Vietnam War veteran Vince Zegowitz of Pasadena answers questions about such things as the speed of a fighter jet and the speed of a ship from members of the fifth-grade class at Hilltop Elementary School.

For the fourth year, local active duty and veteran military personnel volunteering on behalf of Hospice of the Chesapeake visited the fifth-grade class at Hilltop Elementary School in Glen Burnie, Maryland, on Nov. 7 to talk and read to fifth-grade students about their military service and why the nation celebrates Veterans Day.

The three Navy veterans who visited four classrooms included retired Navy Capt. Paul Mullenhoff of Bowie, retired Navy Capt. Bill Malicki of Annapolis and Vietnam War Navy Veteran Vince Zegowitz of Pasadena. They also were joined by an active duty member of the Army from Fort George G. Meade. After introductions by the school’s music teacher, David Shepherd, and a bit of background about their guests’ role in the military, the visitors then read books about veterans, shared medals, ribbons and mementos, and answered a barrage of questions from the students.

In one classroom, Malicki mentioned that he flew in the clear nose of a Neptune reconnaissance aircraft while serving in Vietnam prompted the teacher to display it on the classroom’s smart board, which prompted a ripple of “wow” across the desks. In Zegowitz’s classroom, a student told him her grandfather served in World War II, which prompted Zegowitz to marvel at his longevity and then told the young girl that if she hadn’t thanked him for his service she should. “I know he would appreciate hearing that, especially from you.”

The visit is part of a month-long effort of Hospice of the Chesapeake’s We Honor Veterans program to help the community understand how important it is to thank veterans for their service while they are living as well as to understand their unique healthcare needs. Part of this effort includes coordinating 10 group Honor Salutes. As of this date, there have been visits to nine assisted and senior-living centers, with more than 100 veterans being honored by active duty and retired personnel as well as U. S. Naval Academy midshipmen.

The organization created the Honor Salute program to honor veterans who are being cared for in their final stages of illness with a ceremony to recognize them for their service to our country and to acknowledge the many personal sacrifices each of them made to ensure our freedom. The brief but poignant ceremony has become a hallmark of its commitment to those who have served in the military and has made a tremendous impact on patients and their families. 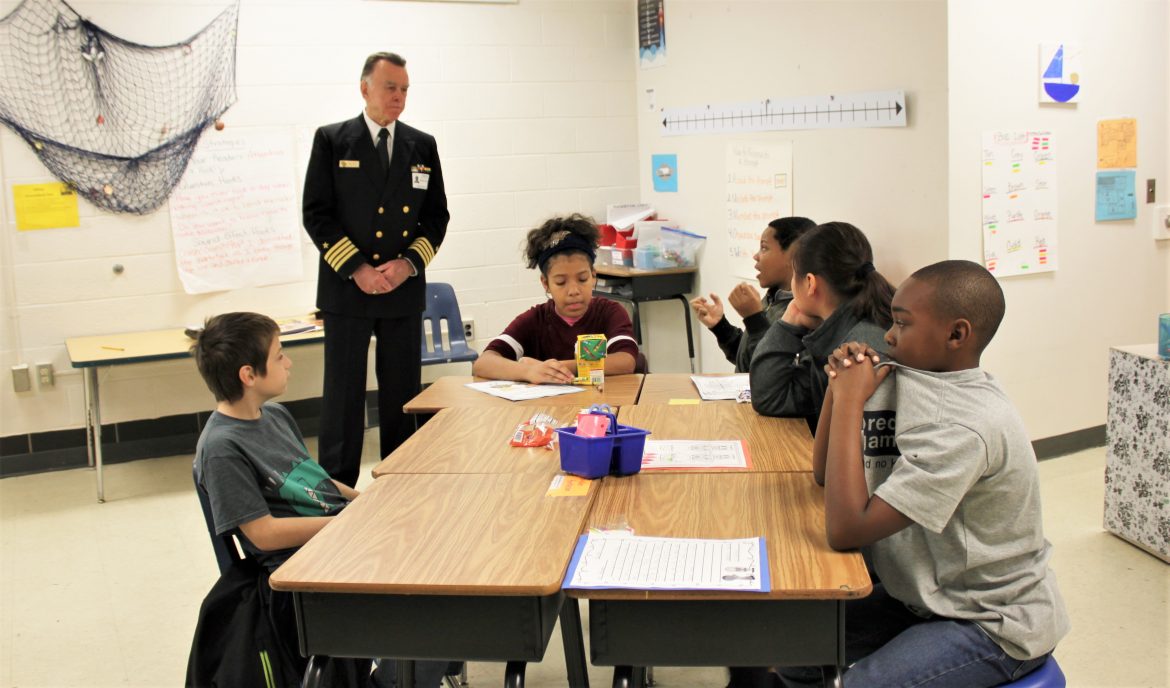 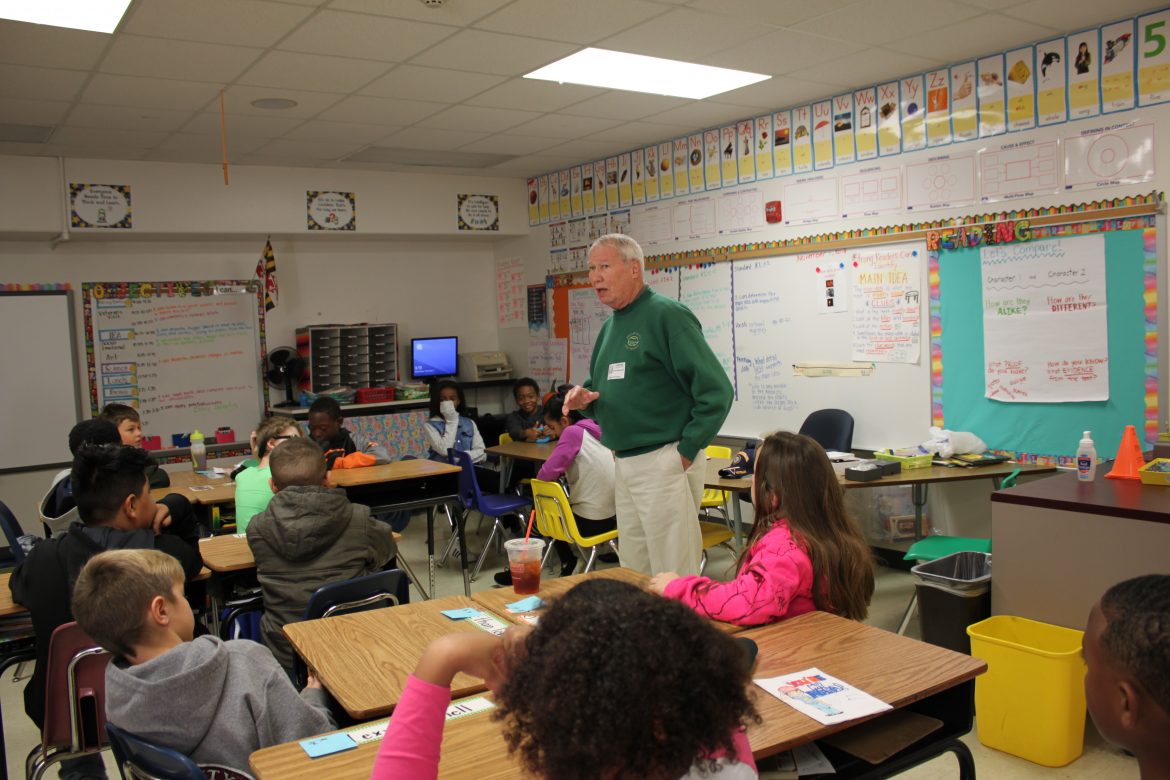 Retired Navy Capt. Paul Mullenhoff of Bowie talks to a classroom of fifth-grade students at Hilltop Elementary School about his service in the Navy. 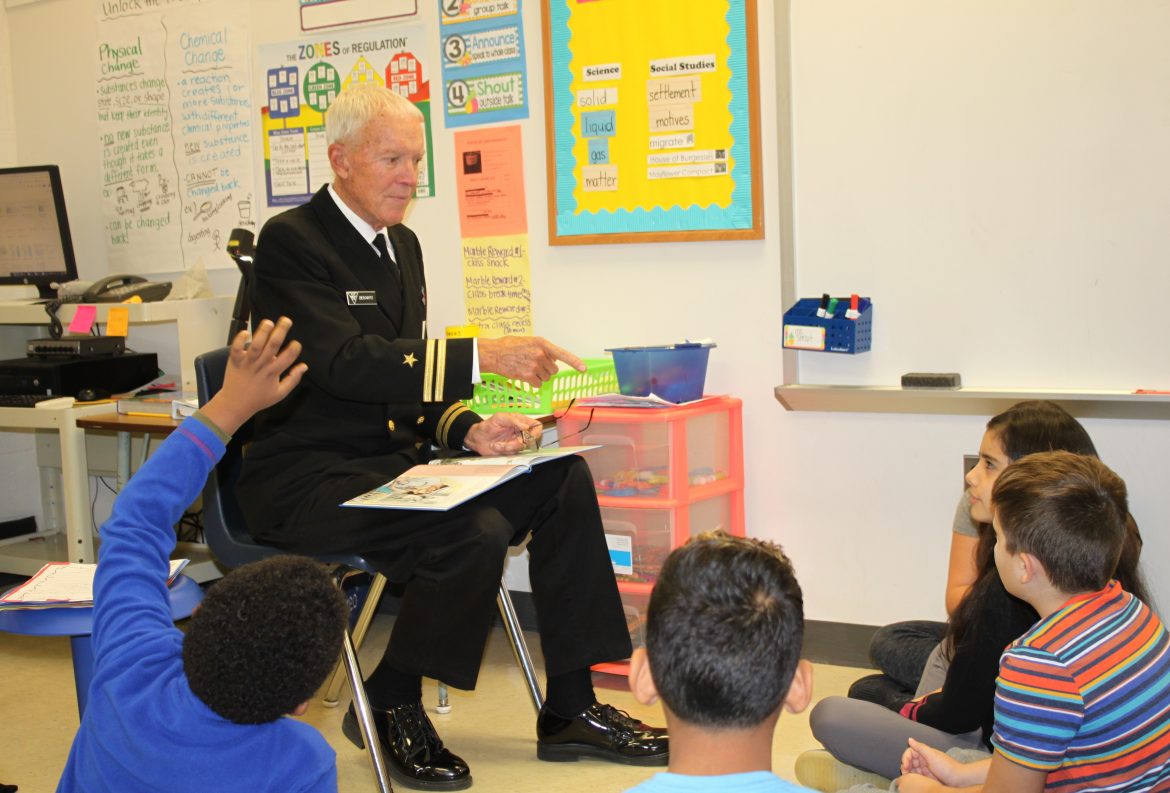 Navy and Vietnam War veteran Vince Zegowitz of Pasadena answers questions about such things as the speed of a fighter jet and the speed of a ship from members of the fifth-grade class at Hilltop Elementary School.

Another record set: Hospice of the Chesapeake Golf Tournament raises $144K
Helping children celebrate the holidays while coping with loss