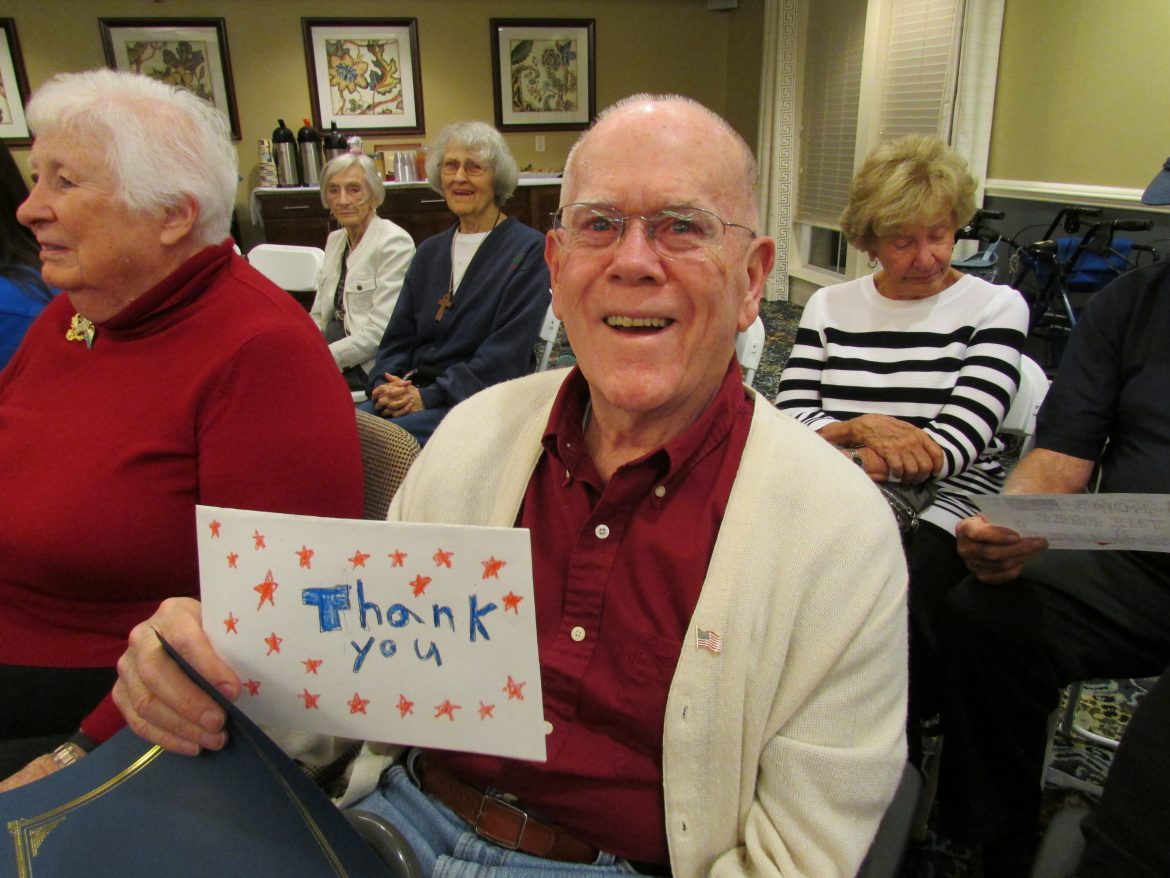 Bill Durand, a resident of Brightview Senior Living in Severna Park, shares a thank you note given to him by a member of the military and written by an Anne Arundel County elementary school child. Photo by Barbara Sigler.

For several years, Hospice of the Chesapeake has invited the community to attend Veterans Day events designed to recognize the dedication and sacrifice of men and women who have served in the military. With veterans making up more than a quarter of its patients, the nonprofit considers it a duty to help the community understand how important it is to thank veterans for their service while they are living.

One of the dilemmas of having an event in one place is that veterans who lived in assisted- and senior-living centers are unable to attend. This year, the organization’s We Honor Veterans Committee decided to not only honor veterans while they are living, but also, where they are living. Beginning on Oct. 14 with the veterans of Morningside House of Friendship in Hanover and finishing Nov. 19 with Heartlands Assisted Living in Severna Park, the committee coordinated group Honor Salutes at 10 assisted and senior-living centers in Anne Arundel and Prince George’s counties. The other centers visited by these men and women in dress uniform were Brightview Senior Living centers in Annapolis, Edgewater and Severna Park; Doctors Community Rehabilitation in Lanham, FutureCare Capital Region in Landover, Genesis Healthcare Hammonds Lane in Brooklyn Park; Somerford Place in Annapolis; and Sunrise Senior Living in Severna Park.

In total, 183 veterans were honored by active duty and retired personnel as well as U. S. Naval Academy midshipmen. Each of them received a certificate of appreciation from Hospice of the Chesapeake, an American flag pin and a thank you note written by Anne Arundel County Public Schools elementary-age children. Each ceremony ended with the military visitors standing in formation and performing a silent salute.

In some communities, the salute was quiet and small, especially in assisted-living centers like FutureCare Capital Region, where veterans were visited and saluted in each of their rooms. Air Force Tech Sgt. Akesha Lowry of Crofton has taken it upon herself to learn the anthems of each of the branches of the armed forces and includes it whenever she performs an Honor Salute. Each time her alto voice would begin the first verse in a patient’s room, the veteran lit up with a smile as they sang along or tapped their toes in rhythm.

Other communities ran with the opportunity to celebrate their veterans by adding more to the program. A luncheon was served at Sunrise Senior Living and musical performances were offered up in the programs coordinated by the Brightview communities in Severna Park and Annapolis. Barbara Sigler, the vibrant living director at Brightview in Severna Park said having the organization and its military volunteers there to honor their veterans was appreciated in many ways. The residents especially enjoyed meeting the younger generation currently serving and sharing stories, insights and laughter. “Getting cards from local children that say, ‘Thank you! You’re my hero,’ was icing on the cake,” Sigler said. “The actual Honor Salute was so powerful that I don’t think there was a dry eye in the house.”

That sentiment was echoed by Jenelle Schrader, the vibrant living director at Brightview in Edgewater, who said her community’s veterans were deeply moved by the Veterans Day weekend visit. “Residents displayed tears of joy and appreciation,” she said.

The month-long caravan of Honor Salutes is part of Hospice of the Chesapeake’s We Honor Veterans program, a partnership with the National Hospice and Palliative Care Organization and the Department of Veterans Affairs. It is focused on providing the best care for veterans and their families through respectful inquiry, compassionate listening and grateful acknowledgment.

Director of Volunteer Services Mary Jermann, whose department oversees the program, said this grateful acknowledgement can be witnessed in these broader community events, as well as experienced in smaller groups. “The smaller, intimate ceremonies are much more common for those in our hospice care, where we honor our veteran patients at the end of life,” Jermann said. Volunteers have shared dozens of poignant experiences when nonresponsive patients have not only acknowledged the ceremony, but even participated in their own Honor Salute by moving their lips to the anthem or lifting their hand to return the salute.

“It warms our hearts to hear these stories and to know that we have had a hand in bringing peace to our veterans,” Jermann said. 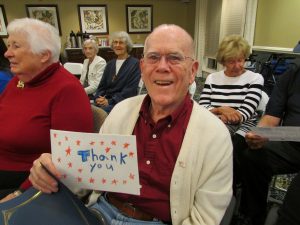 Bill Durand, a resident of Brightview Senior Living in Severna Park, shares a thank you note given to him by a member of the military and written by an Anne Arundel County elementary school child. Photo by Barbara Sigler. 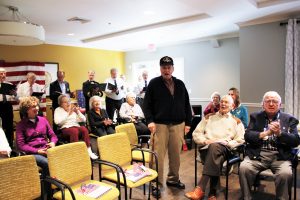 Upon hearing the Calvary United Methodist Men sing the U.S. Coast Guard anthem, Eugene B. Calmon, the sole USCG veteran in attendance at the Veterans Day Honor Salute performed at Brightview Senior Living in Annapolis, jumped to his feet to sing along. “They don’t normally remember the Coast Guard!” he said to the crowd. 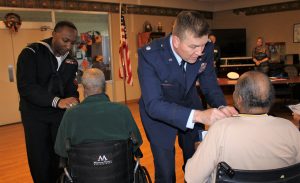 A sailor and an airman pin American flags to the collars of two Genesis Healthcare Hammond Lane residents in Brooklyn Park. 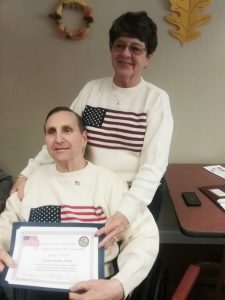 Army veteran James Welsh and his wife Sharon Welsh hold the certificate of appreciation he received after his Honor Salute at Somerford Place in Annapolis. Photo by Tammy Turner 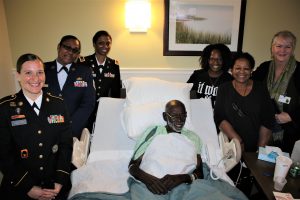 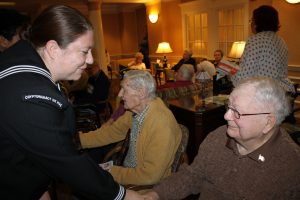 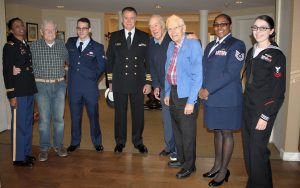 Members of the military pose with three residents of Sunrise Senior Living in Severna Park before they salute the center’s veteran residents. The residents pictured from left are Robert Inscoe, Donald Wood and Edward Bjorn. 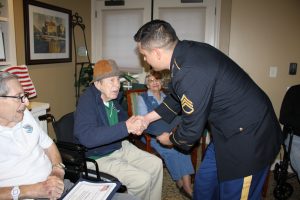 Brightview Senior Living South of Edgewater resident Roger Pickens receives a handshake of gratitude and a certificate of appreciation from an Army staff sergeant.