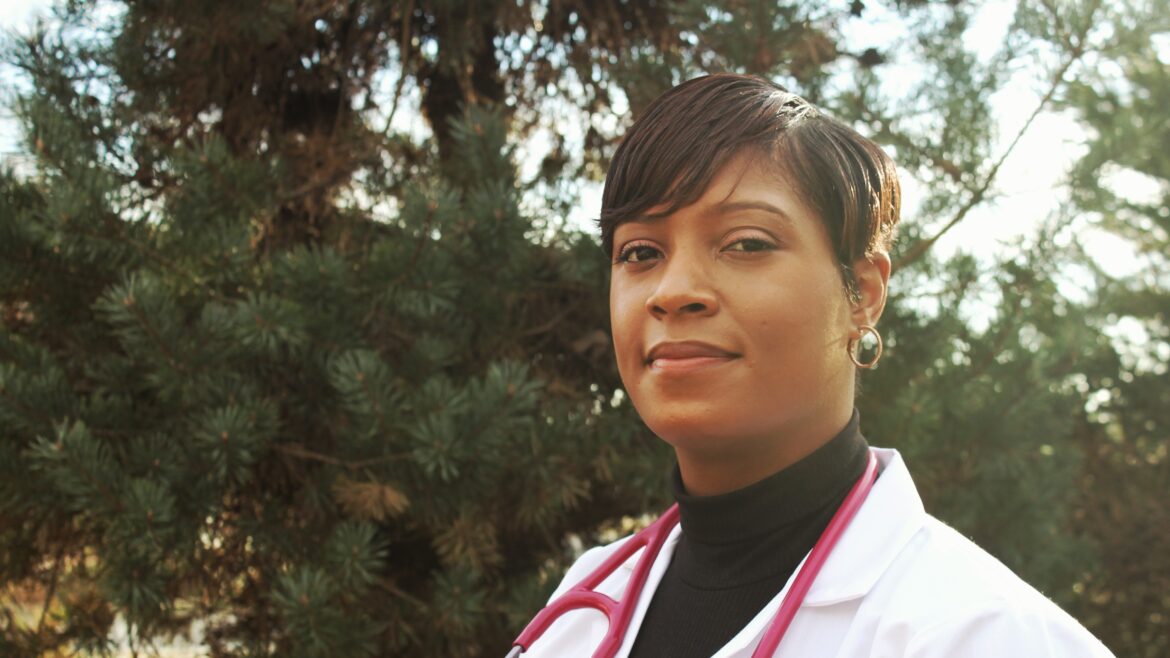 Last summer, Rachel Sherman was tired. The nurse practitioner was working 10- to 12-hour days at Prince George’s Hospital Center amid the COVID-19 pandemic. She also was pursuing her doctoral degree in nursing at Frontier Nursing University. But we are not talking about that kind of tired.

When a Black man was kicked out of the Fish Market restaurant in Clinton, Maryland, because he would not remove his “I can’t breathe” T-shirt, she was tired of the treatment of the Black community in Prince George’s County. So, she added another important activity to her daily life: She stood in protest at the restaurant. Every day. For more than three months.

“We see these injustices happen, we see substandard service in Prince George’s County and as a county resident I just spoke out about it. This is not what we deserve,” Sherman said.

Her courage and dedication to the community she loves was honored by District 9 Prince George’s County Councilman Sydney Harrison who chose her for the Rosa Parks Award for Excellence in Community Activism at the District 9 Day of Service Awards. She received the award during a virtual ceremony on Jan. 18, Martin Luther King Jr. Day.

She was joined in her months-long protest by people who supported We, the People of Prince George’s County, a grassroots organization she and friend Joseph Tolbert III cofounded. Soon other organizations, including the LGBT-Q Dignity Project and PG Changemakers, were onboard. The protest was covered by the Washington Post, Washington Times and Washington Informer. It also connected Sherman with Councilman Harrison, which opened doors for her.

“Now that I have relationships with politicians and leaders in the community, I get to sit at the table with people who can do something about our concerns,” Sherman said. One of those concerns for the county is the lack of decent healthcare. The new hospital, in its final stages of construction, is a step in the right direction. But there are plenty of other concerns, including a poor patient to provider ratio, lack of access to healthy food options and safe walking trails for all of the county’s population and other issues. As one who grew up, works and lived in the county, she says she can speak from experience about the inequity in healthcare. She also is buoyed by the growth and progress of minority activists in the county. “We are becoming a little more progressive in PG County,” Sherman said. “They are willing to take on the fight.”

Since those 100 or so days standing up against racism in a restaurant’s parking lot, much has changed in Sherman’s life. She can now be called Dr. Rachel Sherman, having earned her doctorate in nursing. Her doctoral research project was about community-based advance care planning, which works hand-in-hand with her new career as nurse practitioner at Chesapeake Supportive Care with Hospice of the Chesapeake. She looks forward to working with the organization’s community education program where she can put her research and activism to use reaching out to underserved residents. She acknowledges there are two parts to this task – not only do medical providers need to find a way for underserved populations to have greater access to better healthcare, but they also must find a way for the historically mistreated minority community to be willing to accept it.

Hospice of the Chesapeake’s Chief Medical Officer Eric Bush, MD, was proud of Sherman’s Rosa Parks Award but was not at all surprised. Her resume and research were already an indication of how committed she is to improving access to healthcare for minority populations. “Having a care team that not only cares for the individual but also for those who are most in need of our care in the community is an important goal for our organization,” Bush said. “Rachel is an inspiring leader in working towards that goal.”

For Sherman, an act of protest made way to connections and a network determined to make changes in their community. “I’m excited to see Prince George’s County grow in a better way,” she said. 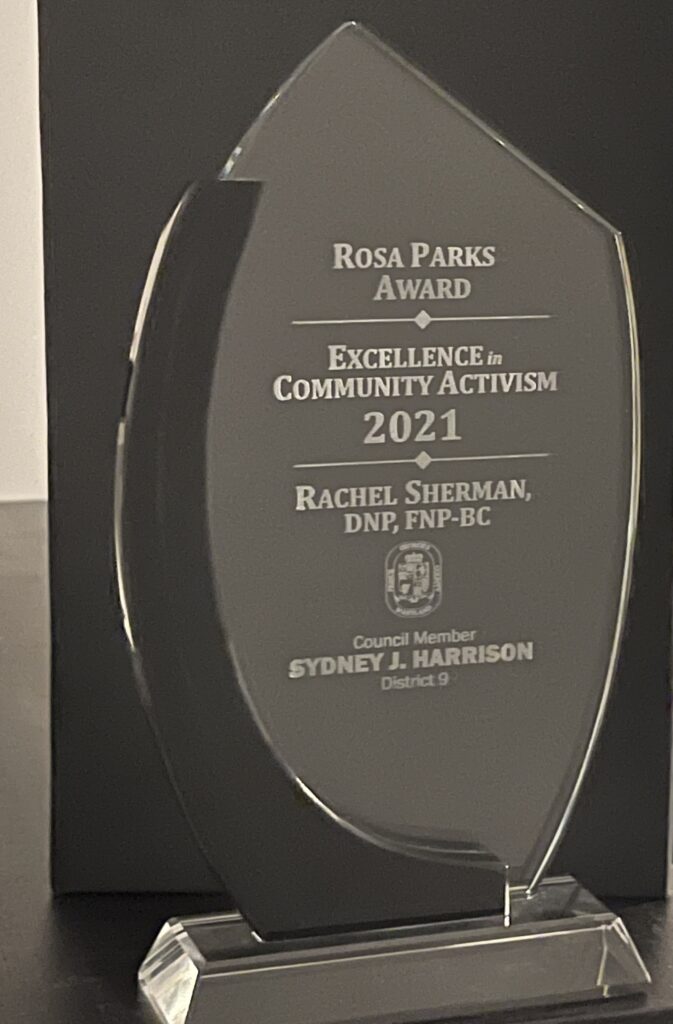 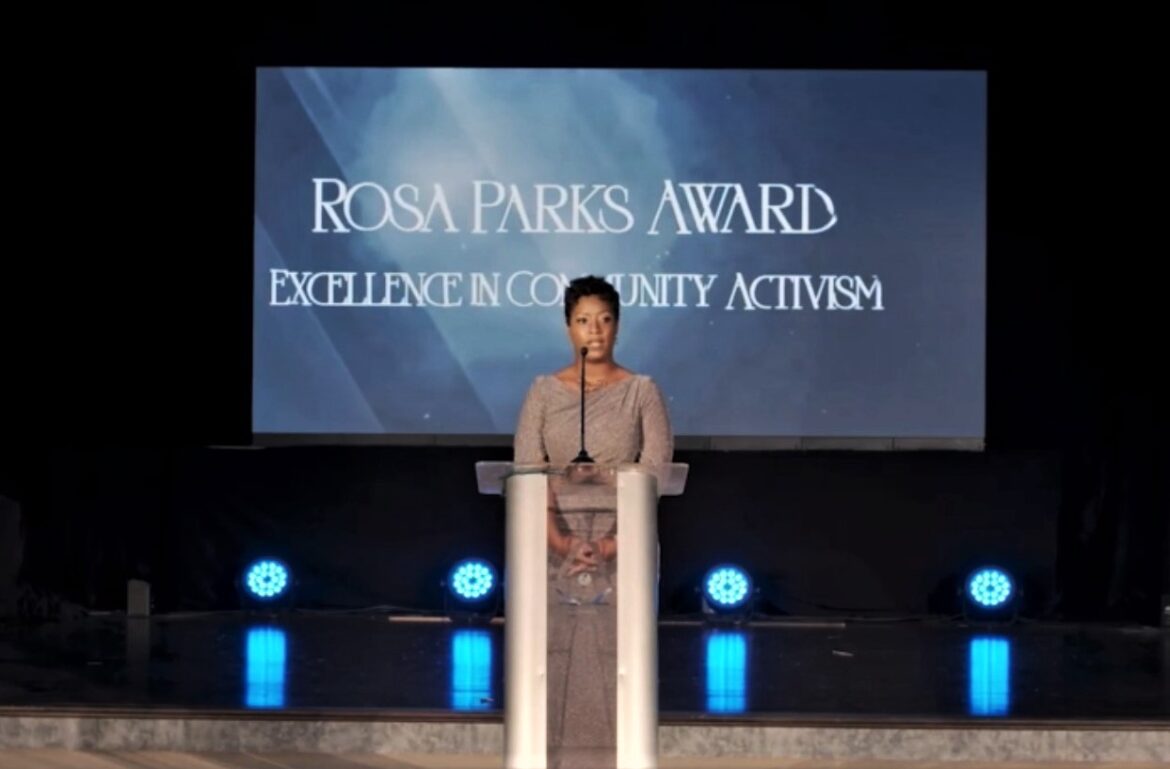