‘Glow’ a global celebration of fashion and hospice care

There was an air of excitement as plans were announced on April 27 to a gathering of influential community leaders for “Glow,” a one-of-a-kind event to celebrate World Hospice and Palliative Care Day 2022. The kick-off event took place at Saks Fifth Avenue in Chevy Chase, Maryland, which is also where the celebration will be held in the fall.

Hospice of the Chesapeake is partnering with Saks Chevy Chase to create a highly curated evening that will consist of a dinner and fashion show showcasing the latest in couture and ready-to-wear trends from international designers. The planning for this glamorous fundraiser is already bringing together leaders from the communities of fashion, healthcare, business, and philanthropy.

During the kick-off event, key members of the committee tasked with organizing the event were introduced, including Marguerite Steege, Vice President General Manager of Saks Fifth Avenue, Chevy Chase, and Glow committee co-chairs, Patricia Trudeau, Vice President and Chief Administrative Officer at Association of Corporate Counsel and Gretchen Cusack, community philanthropist whose past leadership roles include serving on the board of the Wellness House of Annapolis. Each spoke of the importance of access to advanced illness, end-of-life and bereavement care, with a focus on quality of life and celebrating families and their legacies and how this event can help make that possible.

“Glow” will be staged throughout the store and orchestrated by renowned Washington, D.C., event planner André Wells on World Hospice and Palliative Care Day 2022, which is Oct. 8. Funds raised from the event will support the work of the nonprofit Hospice of the Chesapeake. The organization has grown and expanded over its 42 years to care for people living with life-limiting illness and their families in Anne Arundel, Charles and Prince George’s counties. This amounts to more than 52,000 hospice patients and more than 100,000 family members receiving compassionate and expert care from hospice, supportive and bereavement team members. 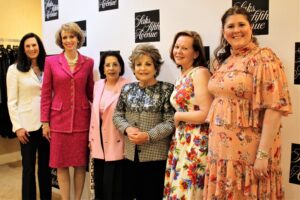 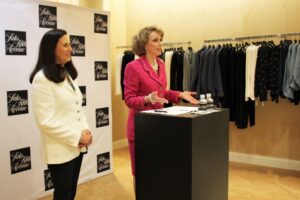 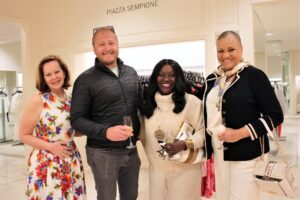 From left, Shauna Chabot and Jason Cherry, Hospice of the Chesapeake Foundation Board vice chair and owner of Tap99 and Mission Escape Rooms, chat with GLOW committee members, Shelia J-McClaney of the U. S. Department of State and Jovita Gross-Rogers with the John F. Kennedy Center for the Performing Arts.

Hometown hospice gala returns, raising more than half a million
Workshop explores how movement helps us cope with grief