A celebration of women and commemoration of those who provide hospice and palliative care was held in Washington, D.C., at the home of Nomaindiya Mfeketo, the Ambassador of The Republic of South Africa. It took place on National Women’s Day, celebrated annually in South Africa on Aug. 9. It marks the anniversary of the day in 1956 when about 20,000 women marched to the Union Buildings in Pretoria to protest legislation aimed at controlling the movement of Black women in urban areas.

The reception was to honor Hospice of the Chesapeake’s “Glow,” a one-of-a-kind event to celebrate World Hospice and Palliative Care Day 2022 on Oct. 8. Mfeketo and Dame Karen Pierce, the Ambassador of the United Kingdom are patrons and honorary chairs of the event.

After Hospice of the Chesapeake’s CEO Michael Brady thanked the ambassadors and the guests for their support of the nonprofit’s mission, Mfeketo spoke to the guests, many South African nationals with healthcare workers among them. She talked about the significance of both National Women’s Day and World Hospice and Palliative Care Day, noting that roughly 80 percent of hospice and palliative care providers worldwide are women.  She noted that the COVID-19 pandemic took its toll on that workforce as well as on women around the globe. Though her country has come a long way since that march in 1956, she said her country shares the work of other countries who all need to do more to bring equity to women in healthcare.

Monica Hastings, RN, Clinical Manager for Hospice of the Chesapeake and Lumka Mgqolozana, RN, representing South Africa, spoke on behalf of their colleagues about their mission and the important work of nurses around the globe and in hospice and palliative care. Then they were joined by Mfeketo and Dr. Gail Andrews, Chief of Mission for the Embassy of the Republic of South Africa, in lighting candles and leading a moment of silence to honor caregivers around the world and to remember those who were lost in the line of duty during the pandemic.

The evening’s ceremony wrapped up with Hospice of the Chesapeake’s Chief Advancement Officer Shauna Chabot sharing how in 2003 her organization was the first hospice agency in Maryland and one of the first in the country to adopt a sister hospice in sub-Saharan Africa, Brits-Hartbeespoort Hospice in South Africa. “While they are very far away from here, we think of them this evening as we celebrate National Women’s Day,” Chabot said.

With the help of Mfeketo and Pierce, Hospice of the Chesapeake is partnering with Saks Fifth Avenue Chevy Chase to host “Glow,” a dinner and fashion show highlighting the best fashion trends of the fall season. The fundraiser brings together leaders from the communities of fashion, healthcare, business, and philanthropy with members of the diplomatic corps. Funds raised from the event will support the work of Hospice of the Chesapeake and Brits-Hartbeespoort Hospice. The organization has grown and expanded over its 43 years to care for people living with life-limiting illness and their families in Anne Arundel, Calvert, Charles and Prince George’s counties. 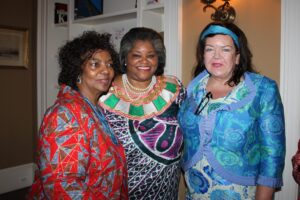 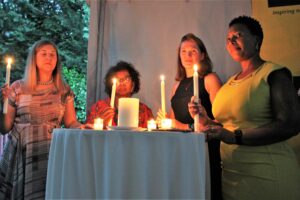 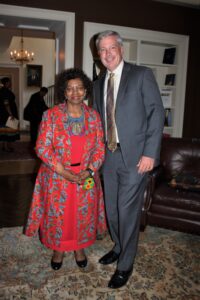 Nomaindiya Mfeketo, Ambassador of The Republic of South Africa, with Michael Brady, CEO of Hospice of the Chesapeake.

Family, mandalas, cooking and pets are all part of fall grief programs
Schindler lecture back in-person, topic is trauma-informed care