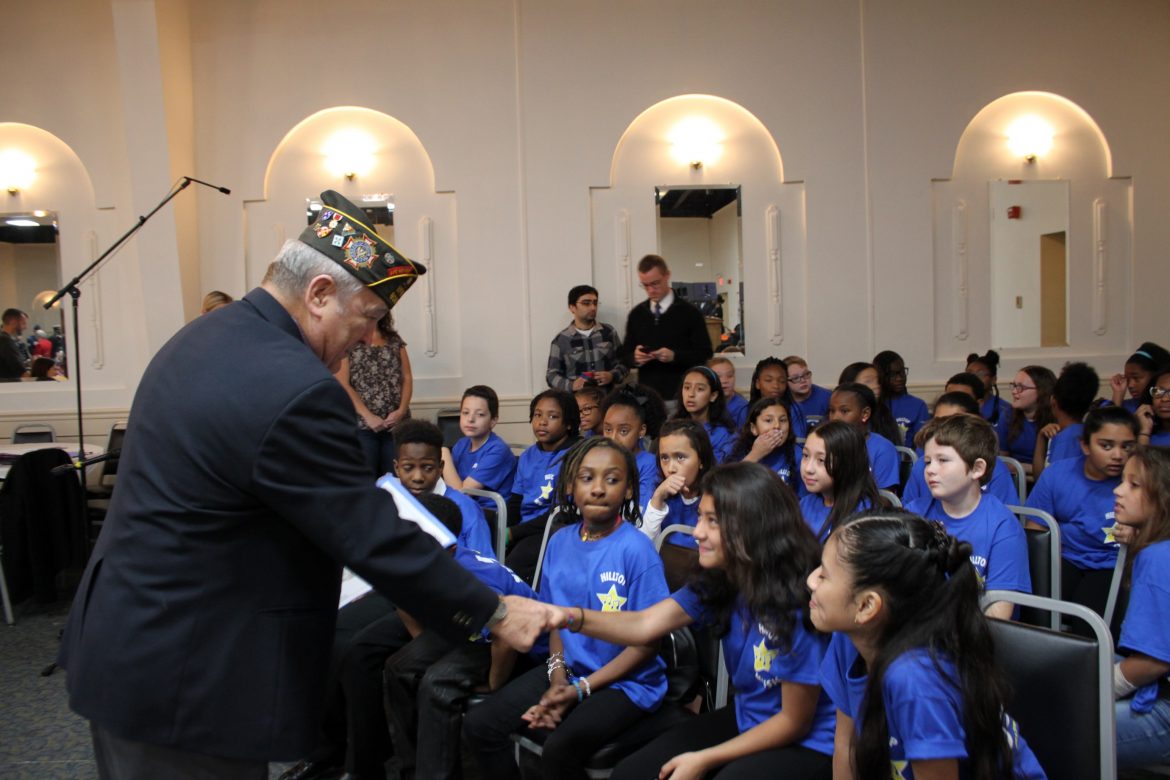 Marine Corps Veteran Bert Mueck thanks a fifth-grade student from Hilltop Elementary School for participating in the Veterans Day Celebration and for writing a letter of thanks.

Three months after the United States entered World War I, a transformation began along the railroad that runs between Baltimore and Washington, D.C., unlike anything the region had seen before. In a little over eight weeks, quiet Maryland farmlands would become populated with 1,200 wooden buildings that could accommodate a constant flood of tens of thousands of new recruits. The dawn of World War I was also the birth of Fort George G. Meade.

Hospice of the Chesapeake chose to highlight that moment in history during its annual Veterans Day Celebration held Nov. 10, in Boswell Hall at the Knights of Columbus in Bowie. Mary Jermann, Director of Volunteer Services for Hospice of the Chesapeake, said they were both honored and excited when retired Army Col. Ken McCreedy agreed to share his obvious love for the history of Fort Meade as a way to celebrate veterans. His keynote speech, “Camp Meade and the Great War,” was filled with eye-opening stories of the beginnings of both World War I and an installation that has become Maryland’s largest employer. “It was a great way to acknowledge the significance of Fort Meade, as well as the many men and women who have contributed to the legacy of service for our community and our nation,” Jermann said. 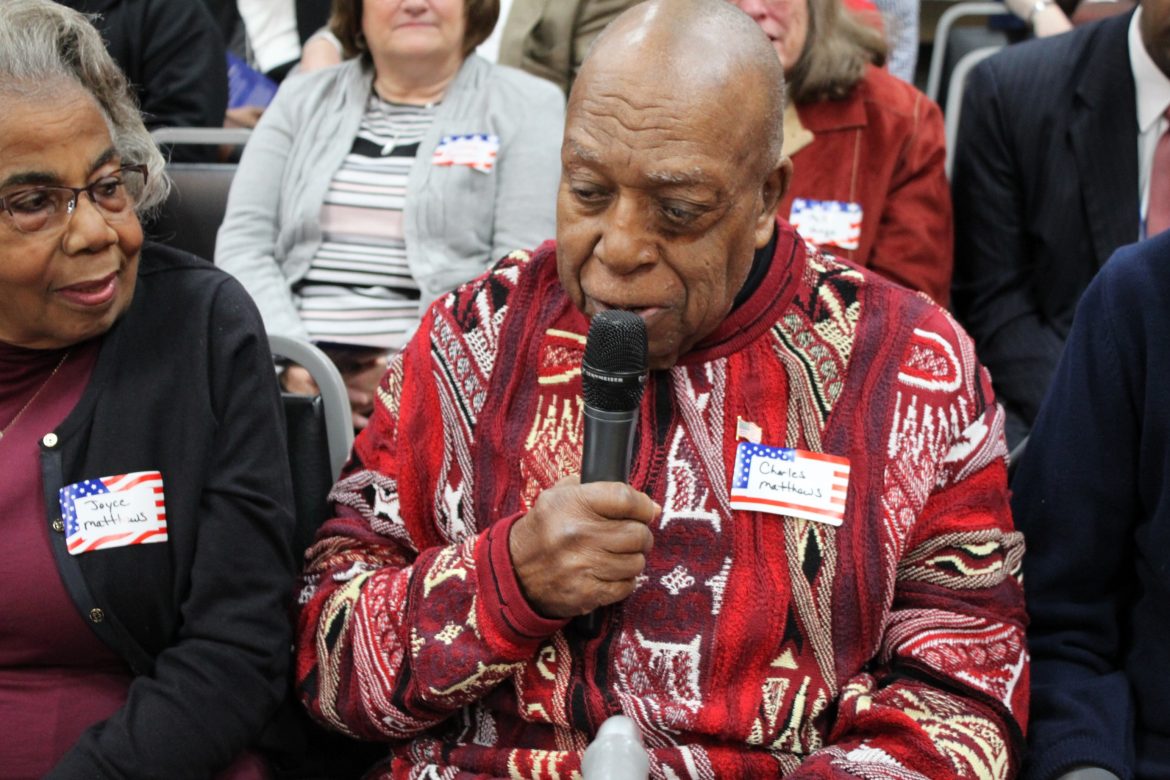 World War II Veteran Charles Matthews shares his name and years of service during a portion of the program where all veterans in attendance had a chance to be personally acknowledged.

An example of that service to the community came when Fort Meade Army Specialist Alexis Kwamin read a poem she wrote after volunteering to perform her first Honor Salute for a Hospice of the Chesapeake patient who also is a veteran. Her emotional reading of “We Shall Never Forget” was rewarded with a standing ovation.

Other highlights included the fifth-grade class of Hilltop Elementary School, who performed “America the Beautiful” and “God Bless America” as a select group read letters of thanks to veterans and a contingency of active military personnel and Naval Academy Midshipmen who performed a salute honoring veterans in the audience as well as the memory of those who have died. Voices of Vets, Inc., performed “The Star-Spangled Banner” at the opening, and then closed the event with a rousing rendition of the “Armed Forces Medley” which features the anthems for each of the five branches of the military.

Around 250 people attended the event. It is part of the nonprofit’s partnership with the national We Honor Veterans hospice initiative, which works to serve and honor the men and women from all branches of the military who have served our country. 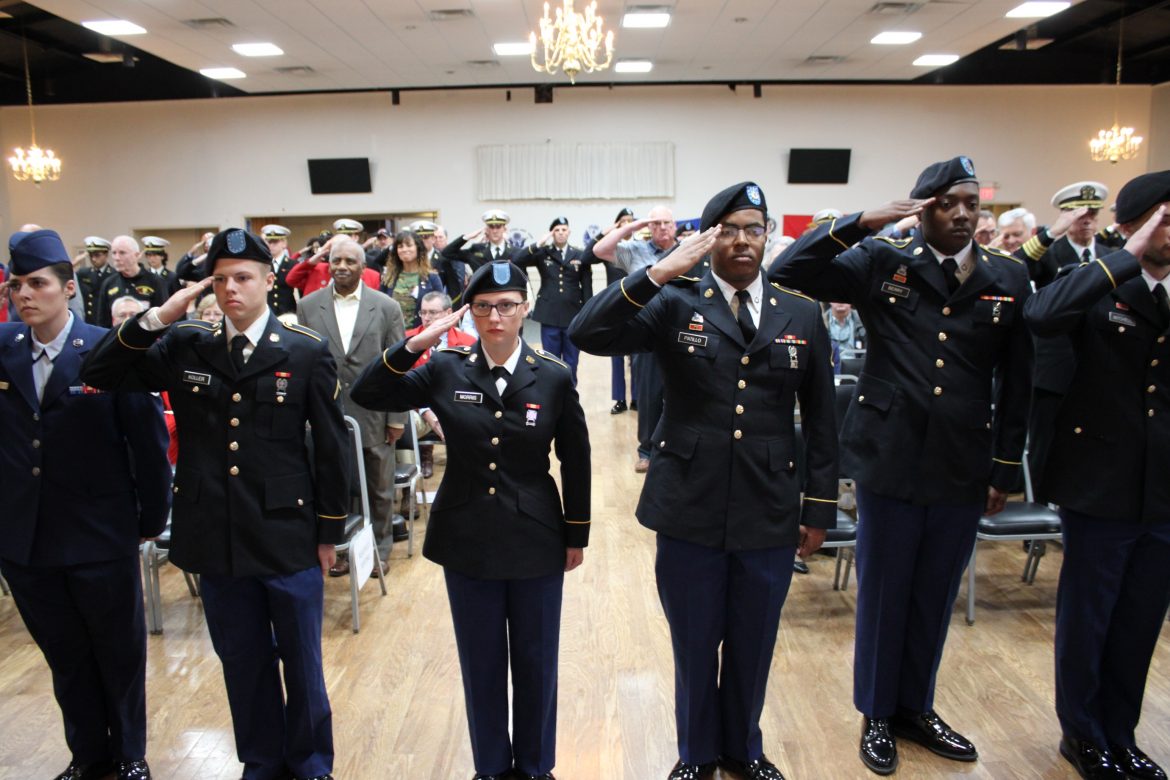 Active duty, veteran military and Naval Academy midshipmen perform an honor salute to honor the memory of veterans who have died.