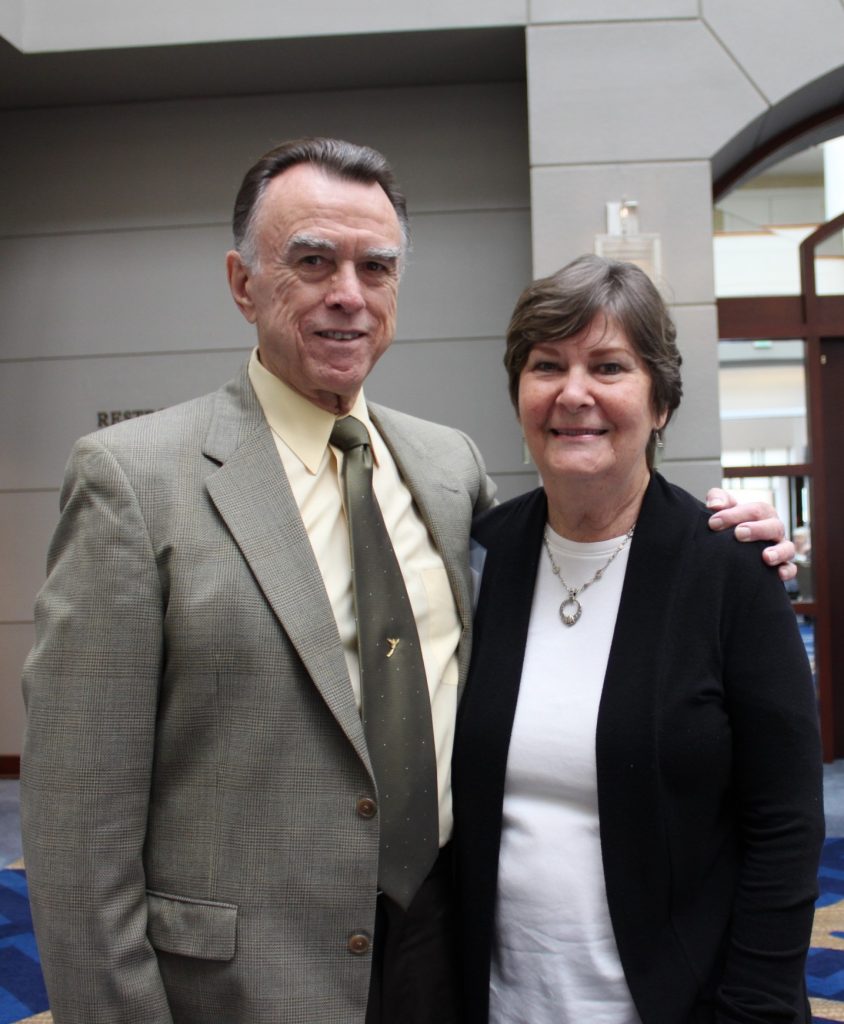 Bill Malicki, pictured here with his wife Jean, has been volunteering for Hospice of the Chesapeake for more than 27 years.

Hospice of the Chesapeake is a very large part of Bill Malicki’s family history. Or, more accurately, the Malicki family is a very large part of Hospice of the Chesapeake’s 40-year history. It started with his wife, Jean Malicki, who began working as a secretary in 1989, retired as Vice President of Administrative Services in 2006, returned under contract as a project manager until 2012 and now regularly volunteers. Their son, Dave Malicki, was our Business Development Manager, and played a critical role in launching our We Honor Veterans program before he died of cancer in 2014.

And then there’s Bill. He retired from the Navy as a captain in 1990 and then started as a Volunteer with us in 1992. And he hasn’t stopped in over 27 years.

Like many of our Volunteers, Bill has a Hospice Story, inspired by our “care and incredible support” of his father-in-law, with whom he was very close. Since then, Bill has served as a Patient Care Volunteer, Vigil Volunteer, Big Buddy at grief camps and Stepping Stones, and on We Honor Veterans Committee. He has facilitated Honor Salutes as a civilian and has even donned his Navy uniform (yes, it still fits him marvelously) to perform them.
Bill doesn’t have a favorite volunteer activity because each position he has taken on has special meaning to him. “Helping patients in the late stage of their life as a Patient Care Volunteer is so rewarding; helping children learn that they are not alone in their grief; seeing the smiles and tears of military veterans during the Honor Salutes, where some of the veterans tell me they have never been told that their service is deeply appreciated.”

“I know it’s cliché, but you definitely receive more than you give.”

With nearly three decades of Volunteering under his belt, Bill has many “Hospice Moments” that have impacted him. But he winnowed it down to three for us.

• As a Patient Care Volunteer, he was incredibly honored when a patient’s wife asked if he would be with her and her daughter at her husband’s bedside when she felt his death was imminent.

• A military veteran he visited weekly initially said he did not want the attention of an Honor Salute. But he changed is mind, telling his wife, “He decided he would do it for me.” His son came all from Nebraska to be there and was at the bedside of his father when he died two days later.”

• As a Vigil Volunteer, he was at Anne Arundel Medical Center with a dying patient who was completely nonresponsive. When he started to read to her from her Bible, she opened her eyes and smiled.

It’s moments like these that make it easy for Bill to recommend becoming a hospice Volunteer. “You get to see how precious life is and how valuable your presence is to the patients you visit,” he said. “I know it’s cliché, but you definitely receive more than you give.”