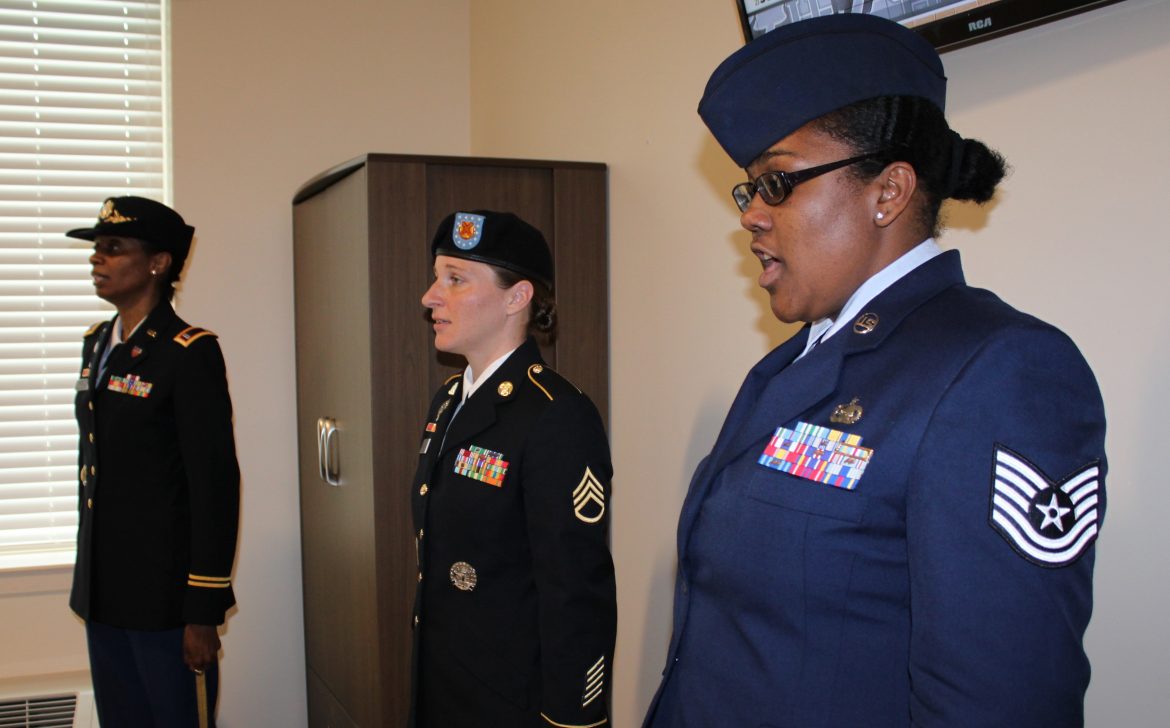 For most of her 15-year career, Air Force Tech. Sgt. Akesha Lowry doesn’t wear her dress uniform daily. At first, when she learned that part of volunteering to perform Honor Salutes required donning that suit, she paused.

But then she went to her first salute and realized what it meant to the Veteran patient and his family to see her there, dressed up for him, honoring him, thanking him. “We’re honoring them in front of their families before they transition,” Lowry said. “I was in awe. I couldn’t believe what I had just experienced.”

She continues to maintain her uniform so it’s always ready and has even updated it with a new service cover in lieu of the standard flight cap. “I can’t wait to get into my blues!”

Her enthusiasm is backed by numbers. She started doing Honor Salutes in April 2018 and as of the end of March 2019, had performed 51 Honor Salutes for individual patients and 12 Honor Salutes at facilities for groups of Veterans.

Her enthusiasm is contagious. She has brought around 10 active-duty military colleagues into the fold to perform salutes. She recruited around 20 members of her military sorority, Kappa Epsilon Psi, to attend our Welcome Home Vietnam Veterans Day celebration on March 29 to cheer on veterans as they arrived for the event.

Her enthusiasm is inspiring. When training to perform Honor Salutes, it was suggested that people use their smart phones to play the service song for the patient’s military branch. An avid member of military choirs throughout her career, she thought to herself, “Why would I play them when I can sing them?” Now whenever she is assigned to a salute, we know that she will sing whichever of the five anthems is appropriate.

“I was in awe. I couldn’t believe what I had just experienced.”

She knows through our volunteer training that music plays an important role in caring for patients with Alzheimer’s disease or other forms of dementia. There have been many instances where a patient who couldn’t remember a family member could perk up and singalong with or mouth their branch’s anthem. At first it is surprising, but then, it made complete sense to her. “The minute you join the military, that service song is drilled in your head,” Lowry said. “I know when I hear my song, I am like, ‘Yay! Air Force!’”

There are two Honor Salutes that she will never forget. One was a gathering of 20 family members that eventually made it to YouTube. When she walked in, the Army patient scowled, “What’s an Air Force person doing here,” he said.

Lowry told him, “We all serve under the same flag.” Then she pinned the flag on his clothes and sang the Army service song. When the salute was done, he was in tears.

It was that moment that taught Lowry to always give a brief speech while saluting explaining that the nation’s military serves under the same flag. It is a part of the ceremony that has been added by other volunteers performing salutes.

The other indelible Honor Salute was for a woman. It was the first time Lowry had performed an honor salute not only for an African American woman, but also for a female Air Force officer. As she talked with her and the family, she learned the patient had served for some time in the 70th Intelligence, Surveillance and Reconnaissance Wing. “I work in that wing.”

It all seemed to be a mission that destined to be completed by Lowry, who also is an African American Airman in the 70th ISR Wing.

“I kind of picture myself in the patient’s position: How would I feel if someone came and thanked me for my service. I want to make it my mission. We think about them. We think about what they did,” she said. “I don’t want them to think that they’re forgotten.”